I haven't had anything much to write about for the last few days. This cycle is following the pattern I have become accustomed to, with tiredness starting to peak as I approach mid-cycle. I am not nauseous or suffering from diarrhea. I get hungry, but I can't eat much because I can't taste much either and the tingling in my mouth is unpleasant if the food is cold. The fingers still tingle badly when I touch cold things, though I have learned to use a cloth or oven holder to get stuff from the fridge, and there have been no droppings or breakages lately.

We did a big excursion on Saturday in the late afternoon to the annual Sculpture by the Sea at Cottesloe Beach. There are lots of pictures on my other blog. It was crowded, but you could usually get a photo of a sculpture without extraneous bodies. I did include one in this: it was great to see the interaction. 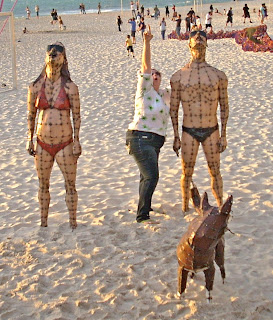 We were there for more than two hours, walking up and down stairs and paths . Despite our best efforts we did not see everything, as we discovered when we looked at the catalogue later. I thoroughly enjoyed the outing.

Afterwards we went to Fremantle Fishing Boat Harbour where we shared a fisherman's basket at one of the fish and chip places. The seafood component was very nice - the chips were horrible. I was a bit wobbly as we crossed the railway line to get back to the car, so it was an early night for me.

Yesterday we had visitors for lunch and I made a fish pie (snapper, prawns and scallops in a herbed marscapone and sour cream sauce with a cheesy potato topping). Everyone else liked it - I couldn't taste it and only ate half my portion though I finished it later in the evening. Dinner was leftovers. Kevin ate some of the Chili con Carne he made the other day. I cannot eat it - chili really hurts my mouth these days. Bummer - I love spicy food.
Posted by joanlil at 11:27 AM