Tears in the Keyboard

Tomorrow Joan has a blood test prior to seeing the Oncologist on Wednesday. He will have the results of the CT scan and we hope that it shows at least a slowing of the tumour growth. The recent SIRT treatment which was aimed solely at the 30-something liver tumours may give us hope for more time together.

This morning there were tears as we both thought, without words, that The Man will be giving us bad news. I think Joan is ready to forgo further treatment if the oncologist decides that it will not help. In that case, we will ask about a time span and try and do a couple of things on Joan’s bucket list.

Nearly the end of the cycle

I went to have a CT scan yesterday, after I had had a Bowen massage. Gail was able to relieve most of my aches and pains (leftovers from the fall, I am sure). I managed to mess up the CT appointment time again. I was convinced it was at noon and arrived 15 minutes early. WRONG! I was supposed to be there at 10.45 and had been noted as a no show. I burst into tears. However, they managed to fit me in and I had the scan.

We are hoping that this one will show the SIRT has had some effect on the liver tumours. The last scan, back in October and before the radiation, was not good - some of the liver tumours had coalesced and the lung tumours had grown. When I had my last blood test almost 3 weeks ago the CEA was higher than it has ever been, but the doctor said then that sometimes the tumours release more antigen as they die. I hope this is the case.

I will have another blood test on Tuesday and see the oncologist on Wednesday before I have another infusion. My hair loss has slowed considerably, but I expect that will resume with the next dose. I am still really tired and spend most of my time asleep or in a chair. Gail commented that I have lost muscle mass in my legs and shoulders and recommended that I make a greater effort to exercise - even walking a couple of times around the clothesline. I promised I would try.
Posted by joanlil at 12:28 PM 3 comments:

I came home Friday afternoon after 3 and a half days in hospital. Much relieved. The reason I was in hospital was that I fell in the bathroom on Tuesday morning and bumped my head. This is the result. 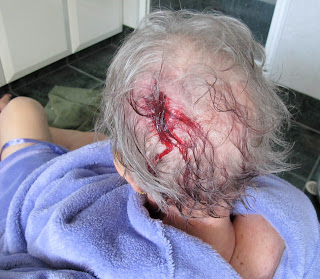 I couldn't get up, so we had to call an ambulance and they took me to emergency at Fremantle. They whacked on a collar and I had an X-ray of my neck and a CT scan of my skull. Both were OK, but they decided to contact the oncologist and he said to send me to St John of God, Subiaco for observation. There are more details on the family blog. I felt fine the next day, except that I was aching all over, both from the fall and from having to lie so still for so long on the very hard emergency ward trolley.

The one advantage of being in St John's is the food, which is remarkably good. You fill in the order form, then it arrives at the appropriate meal hours or days later. No need to think any more, and since I often don't feel like eating something a while after I have told Kevin I would like it, I could eat more. Not that my appetite even approaches previous levels, but I managed at least some of every meal - especially the sweets. Net result: 2 kilos, and I had nothing at all on Tuesday!

The gash is healing nicely and I will get the stitches out on Thursday. 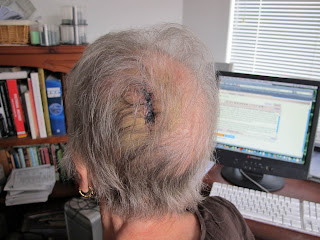 I still have quite a bit of hair and it doesn't seem to be falling out in handfuls anymore. While a couple of people have suggested shaving it all off, I think I will hang on to what is there a bit longer.
Posted by joanlil at 9:55 AM 2 comments:

My hair that is. In the middle of last year my hair thinned considerably ( see a photo here), but it never got to the stage where I needed a scarf or wig to hide a bare scone. I also never noticed it actually falling out.

This time it IS noticeable and I may need scarves and wigs. Kevin noticed it first. I had been sleeping and had perspired on my pillow so he put it out in the sun - and there were handfuls of hair there. I brushed my hand over my sweaty neck and came away with more handfuls of hair. Any time I run my fingers or a brush through a bunch of hair comes away.

We celebrated our 45th wedding anniversary yesterday with a visit to a Vietnamese restaurant. I managed to eat quite a lot. We started with pork and prawn spring rolls. There were 4 in a serving and I ate all of one. Mains were seafood braised with vegetables, yummy sliced pork cooked in a sweet-sour sauce (nothing like the deep fried pork pieces with a pineapple laden sauce that is served up under the name in most Asian eateries) and prawns in a coconut curry sauce. I was able to eat some of everything and enjoy it. Kevin has photos of us and the food on the family blog.

I am really tired again today. I did two loads of washing this morning AND hung it out, so there is some excuse, I suppose. It annoys me that I have to pace myself so much - I was going to go and do some grocery shopping as well, but just couldn't summon up the energy. Instead I sat and reread another of the JD Robb "in Death series". I am doing a lot of light reading - it doesn't matter if I doze off. I can pick them up without having to go back to find the thread again.

We see the oncologist on Wednesday and I expect to have another dose of irinotecan. I will have a blood test on Tuesday - I hope the tiredness is not due to a low blood count.
Posted by joanlil at 4:23 PM 2 comments:

Happy New Year! I hope 2011 will be much better than the year just gone - I firmly believe it couldn't be worse. We usually have New Years Eve here, but I didn't feel up to it so we went to a friend's house. I faded about 8pm, so we came home and fell asleep in front of TV. I woke up to the sound of fireworks in Sydney (three hours ahead in time), so we wished each other Happy New Year and went to bed.

I am feeling much better than I did when I last wrote about Irinotecan and my reactions to it. My appetite has improved (well, it's better than it was a week or so ago) and I have no diarrhea. I am, however, really tired and am sleeping heaps (up to 16 hours a day - just like the cat!)

I am managing to eat quite a lot of fresh vegetables and seafood, as well as cereal and fruit for breakfast. No red meat. Eggs are problematical. Maureen suggested eggflips, but I loathed them when I was cancer free, so I can't see being able to take them now, especially since I vomited up the last lot of scrambled eggs I ate. Hard boiled seem OK. I had some pizza the other day, though I had to leave the anchovies.

I can always eat more when we are out. When we were at a friend's house on New Years Eve I ate quite a bit - especially naughty stuff that I would have avoided when I was so overweight. Like the fresh strawberries topped with tiny meringues - yummy! I ate five. I think the reason I can eat more in such situations is that I am not involved in either the preparation or smelling the preparation (if Kevin does the cooking). However I had quite a big bowl of salad and prawns this lunchtime which he made. Very nice, too.
Posted by joanlil at 2:27 PM 2 comments: