My legs have somewhat diminished in size, but are still very swollen. I was prescribed penicillin and frusemide by the resident at StJoG on Saturday. I went to have my PICC line dressed and the nurse was so upset by my legs that she called the resident. It took 2 hours waiting, but at least my legs were elevated in the chemo chair!

I have been exercising and resting and I think I am getting stronger. I have an appointment with the oncologist on Friday to look at options. This may involve SIRT radiation or more chemo - hopefully a bit kinder than I have experienced to date. I am able to eat a whole lot more since I came out of hospital. Unfortunately nothing tastes all that good - but I am trying.
Posted by joanlil at 6:14 PM 2 comments:

I have had a good day today. Juliet came and collected me and we went to a framer to get one of my pieces ready for the Designing Women exhibition in November. Then we sent off a quilt that has been selected for an Australia Wide exhibition and went to look at a contemporary quilt exhibition. I am tired, but have decided not to take a nap - I will go to bed early.

I am feeling much stronger - though I have been using my walker religiously. Still have to be careful not to sit in low chairs - we had a bit of a problem getting me up this morning from the chair I usually use to put my shoes on. My legs and feet are still very swollen, but I have a reasonable appetite and no diarrhea.
Posted by joanlil at 3:58 PM 1 comment:

It's great to be home and I am so much better - no vomiting,no diarrhea, no medication except Clexane. I still have oedema in my legs though and I am very weak.

I found I couldn't get up from the toilet - no handy handles - so we went off to a medical supply place to buy a commode - just a frame to sit above the toilet so I could stand easily. We bought it and then happened the first of the afternoon's dramas. I decided to go down the stairs rather than the ramp. Five steps - easy. I grabbed the handrail and my knees collapsed. Rolled in a heap down the steps, grazed my knees and bumped my head. Major embarrassment - couldn't get up. With the help of some good samaritans I was finally hauled to my feet and I limped off to the car. Then it happened again - my knees collapsed as I stepped off the curb. Another call for assistance.

Got home safely and sat down in the recliner. Couldn't get up. Kevin pulled me to my feet and the knees collapsed again. He had to call his brother Graham to get me upright. I sat on a kitchen chair thereafter. I had a glass of Sustagen and went to bed about 8pm. I had a good night, though I had to get up lots to go to the toilet (but NOT diarrhea)

We have borrowed a walker and I am hanging on tight when I need to move about. NO recliner for me today - the computer chair is comfortable and manageable.
Posted by joanlil at 10:09 AM 3 comments: 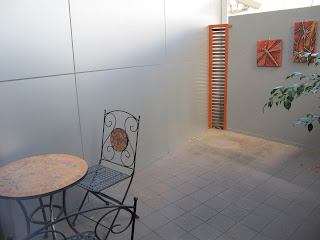 Don't read this post if you are put off by sordid details!

It is difficult to be positive when you feel so horrible. I have had dreadful diarrhea for the last few days, plus I am throwing up without warning. No feelings of nausea, just a sudden upchuck. Last night I threw up immediately I had finished my meal (strawberries and icecream) and swallowed my first Xeloda. I waited a bit, then took the three tablets. Kept them down, then had a nasty accident from the other end when I got up to go to bed. Cleaned that up, took a Gastrostop, then threw up again. It was more than an hour since the Xeloda, so that should have dissolved.

I am sleeping lots, so I should start feeling better soon, I hope. However, the foot-hand syndrome has started again - much earlier this cycle than in the past. Lots of cream on my feet seems to be helping.
Posted by joanlil at 10:37 AM 3 comments:

There was a bit of good news yesterday - the CEA marker has dropped from 4400 to 3500. So I had my infusion of Oxaliplatin and Avastin and started the Xeloda again this morning.

I am having a bad time with the Oxaliplatin side effects. I have pins and needles in both my hands and up my right arm (which was the one the cannula was in) plus in the calves of both legs. These are bearable, but I am also having difficulty swallowing any liquid at all that is not at least body temperature. Any colder and my throat closes up and I find it difficult to breathe. Scary! Also a bit of a problem when it comes to trying to replenish fluids - I still have diarrhea. Have had several cups of tea - can't take warm water unflavoured. Nose drip is worse than usual, too.

I had appointments today for some more Bowen therapy for my shoulder and for another hypnotherapy session. I cancelled the Bowen therapy one because I felt so unwell, and then the hypnotherapist rang and cancelled his session. Can't say I was sorry about that.
Posted by joanlil at 2:47 PM 3 comments: